Who said immortality was forever?

Cas, one of them women adventurers, is stuck leading a pack of elves, and one ass, through a forestry maze on the island of misfit pointy ears that's determined to keep them from their goal; which she'd happily tell you about as soon as she figures it out herself. 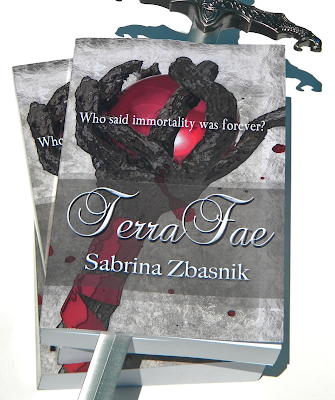 My second novel, TerraFae, is out in both paperback and Kindle form. You can buy it here or here or here, but not here.

Oh, you probably want to know what it's about and stuff.

For those who read Tin Hero, Cas -- a woman stuck in this man's world of stabbing stuff for coins or shiny pebbles (you take what work you can get in this economy) -- is well, not technically back as this takes place 30 years before the events at her little farm.

Yes, it is a prequel, but I swear there isn't a single CGI racist too stupid to live character. Do you have any idea how hard CGI is to work into paper?

Cas is traveling Arda with Hum, the loveable giant whose big heart gets her into more trouble than she needs, when she's visited by the ghost of plots to come when an elf kidnaps her and drags her back to the elven island of TerraFae. (And you didn't think I'd work a title in)

There she learns of her quest to aid the pointy-ears and gets saddled with a black half-elf (you can learn more about her here) and the biggest asshole this side of an internet flame war (no idea why you'd want to learn more about him).

Fighting, jokes, joke fighting, even exiting perused by a bear all occur within the 300 or so pages.

I wanted to explore the common trope of immortality and the perfection of the elves that's become so prevalent within fantasy. Just what would that really do to a community, a person, and how happily would someone willingly go "sleep in the forest" because they were getting in the way.

I also wanted to put together a woman and a man who despise each other, and through trials and tribulations, still hate each others guts with a fire that would power any dwarven forge. (Oh yeah, there's a dwarf too but he's a bit...oh I don't want to give that one away)

TerraFae - available for Kindle and Paperback and stacking into a neat pile to make into a fort.
Posted by Ellen Mint at 12:06 PM

Who said immortality was forever?

Cas, one of them women adventurers, is stuck leading a pack of elves, and one ass, through a forestry maze on the island of misfit pointy ears that's determined to keep them from their goal; which she'd happily tell you about as soon as she figures it out herself.

In the tales of adventurers and heroes everyone knows the farm boy, on his quest to slay the Ogre/ Dragon /Nosy neighbor who really shouldn’t be poking around in the azaleas with his camera must enlist the tutelage of a wise benevolent master . . .